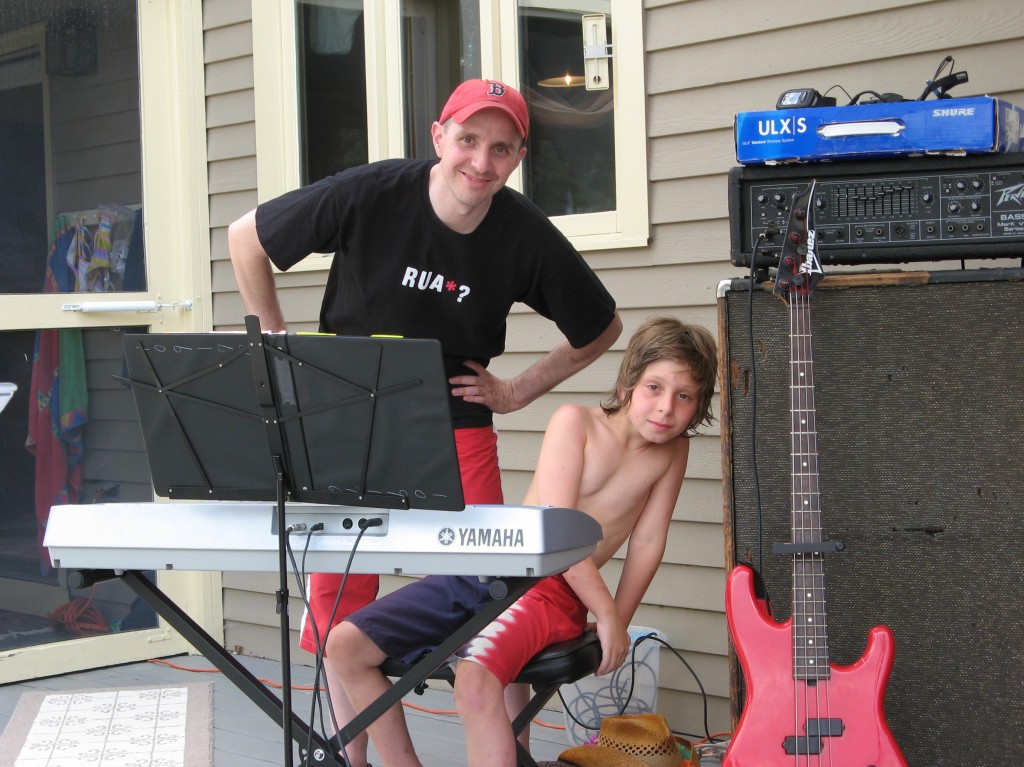 The MCats’ 11th performance. It was a rainy, buggy, cool night. Not ideal. But we managed to squeeze in a couple dozen songs between downpours. I’m told the party crowd enjoyed the show. I wanted to dedicate one song to my wife for our anniversary (also 06/22). We’re constantly changing our repertoire, so my choices (of the songs I sing) were few. I chose Psycho Killer. My other option was It’s All Been Done. Good thing my wife understand my goofy sense of humor.

Set 1
Good Lovin’ (C) – Grateful Dead
In the Midnight Hour (recorded in E, play in D) – Wilson Pickett
Back On the Chain Gang (D) – The Pretenders
Down On the Corner (C) – Creedence Clearwater Revival
Peace, Love and Understanding (G) – Elvis Costello
There She Goes (G) – The La’s
Psycho Killer (Am) – Talking Heads
Hard to Handle (B) – The Black Crowes
Roam (E) – The B-52’s
Should I Stay or Should I Go (D) – The Clash
Achy Breaky Heart (A) – Billy Ray Cyrus 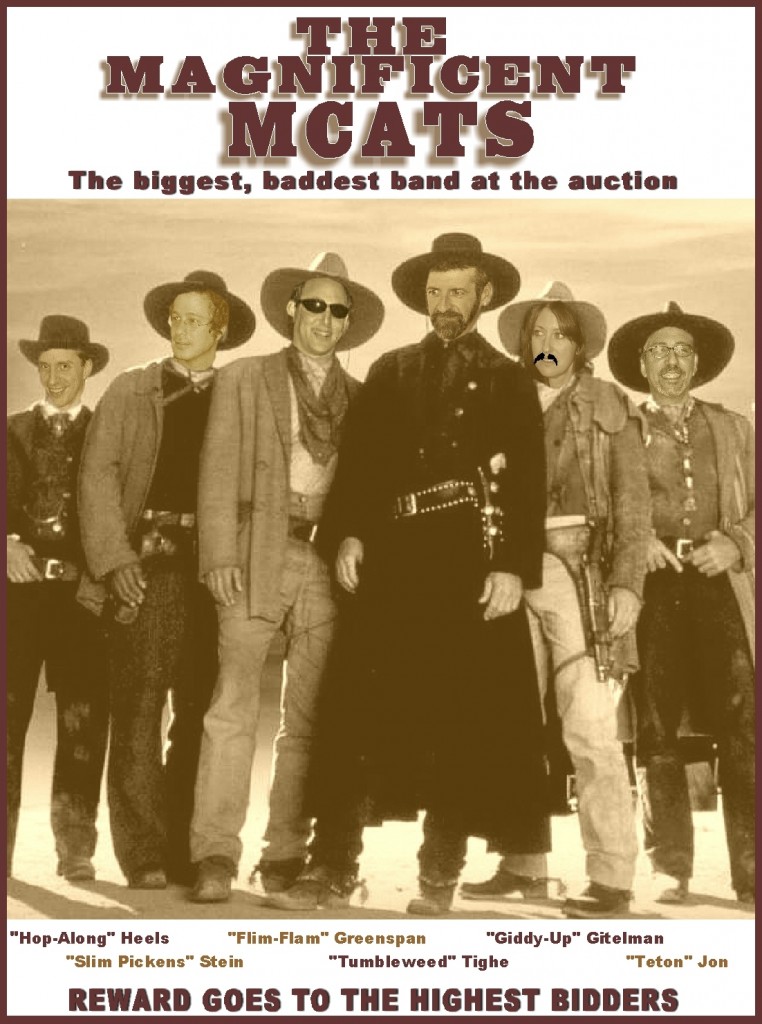 Country-western music was the theme for the 2007 MCT auction. So the MCats’ “Hop-Along” Heels, “Slim Pickens” Stein, “Flim-Flam” Greenspan, “Tubleweed” Tighe, “Giddy-Up” Gitelman, and “Teton” Jon cowboyed up and added a bunch of new songs to their repertoire.

Parents danced. The MCats played. Fun was had by all. Here’s our setlist from the gig:

The parent band of McCarthy-Towne School, the MCats (www.mcatsband.org), requests the honor of your presence for a Parents’ Night Out in Maynard.

Escape the winter doldrums!
Get out and dance!
Rock on for the kids!

The last time we played, Erik’s foot ended up in a cast. So we can guarantee an energetic performance! Plus a bunch of new songs!

Mark the date on your calendar (it’s the day before the Super Bowl).

Like all of our events, this one is a fund-raiser and is sponsored by The Parker Damon Building Steering Committee, a joint committee of the Merriam and McCarthy-Towne Schools.

Those who are about to rock salute you! 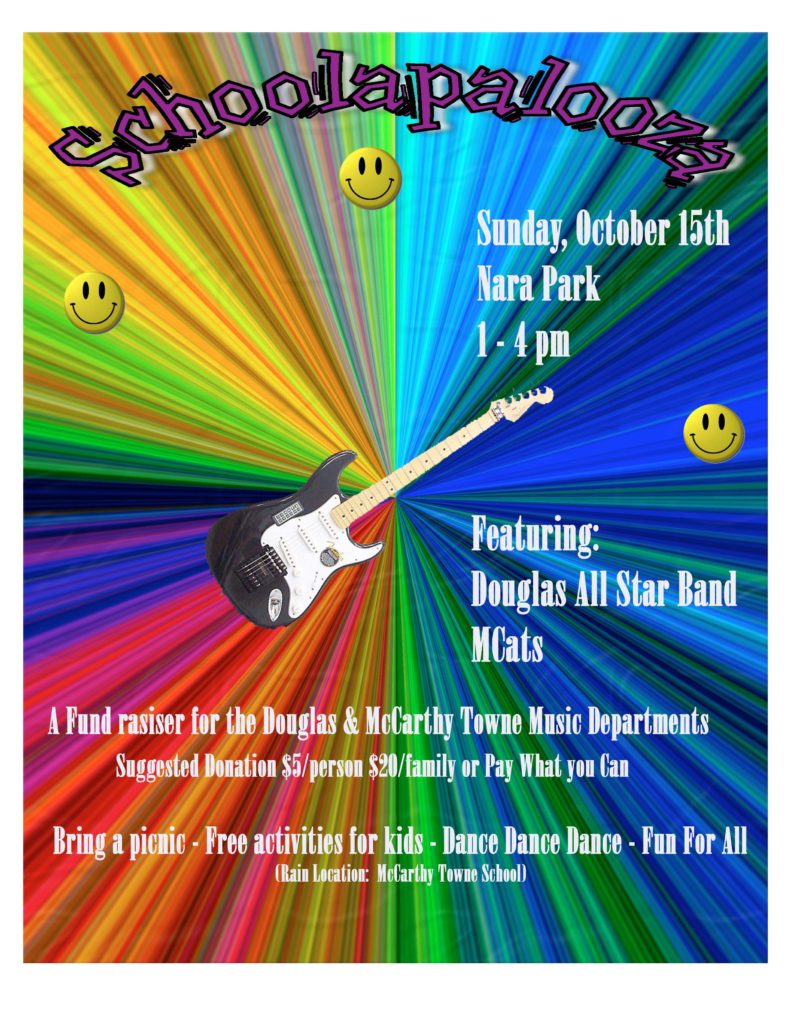 The Acton Beacon ran the following piece about Schoolapalooza:

“ACTON – What began as a challenge in a local town newspaper, promises to become a full fledge musical festival. In Acton Massachusetts two schools are making music to fund their school music programs.

In August, The MCats, a parent band that was formed to raise funds for the McCarthy-Towne elementary school, said to a reporter that what they really wanted to do was have a battle of the bands with the C.T. Douglas School Band.

The Douglas All Star Band founder and principal of the school, Chris Whitbeck, responded to the MCats with a counter offer – let’s hold a musical festival, a celebration of music, families, and our two schools as a way to build bridges and raise some money. Schoolapalooza was born.

The two bands are comprised of school staff and parents. While not professional musicians, the groups came together to add a bit of fun to the school auctions. School auctions have become an important source of funding for small suburban school districts.

The two bands were so successful at raising money that both school PTO’s have requested that they be a regular part of these fund-raising events. Now reaching out to each other, the two school communities will celebrate the talents of each school and have fun at a local park this fall.

‘The idea is to have some fun, raise a little money, and show kids that you don’t have to be a professional musician to make music,’ said Peter Broggi, music teacher and band member at the Douglas School.