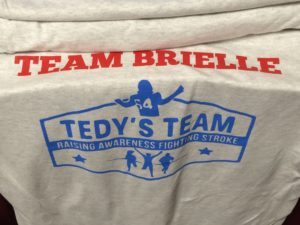 In February 2005, just after winning his third Super Bowl ring and returning from the NFL Pro Bowl in Hawaii, New England Patriots legend Tedy Bruschi suffered a stroke. Bruschi later joined forces with the the American Stroke Association (ASA) to create Tedy’s Team, a group of runners raising money for the ASA and training to complete local and destination races.

On 03/12/16, Team Brielle, founded by Brielle Cormier under the umbrella organization Tedy’s Team, held a fundraiser at Mt. Pleasant Golf Club in Lowell. Brielle started her fundraising efforts (which also include running half and full marathons) after her father died suddenly from a stroke in 2013.

The MCats Band (itself founded as a fundraising band) was honored to play at this great event. Thanks, Brielle!